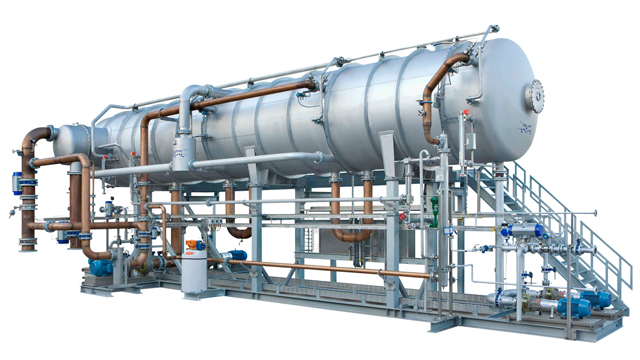 A multi effect desalination plant is an important component in modern power- and process plants which secures a reliable and cost-effective supply of freshwater by using sea water distillation based on waste heat or low pressure steam.

For modern sea water desalination systems the MED is state of the art in thermal desalination. The distillate from MED plants is high purity water with low dissolved solids content. Further water demineralization downstream of the MED plants is then achieved with significantly reduced chemical consumption and less regeneration of the ion exchange columns.

Our product range covers capacities up to 10,000 m3/day per unit. Based on standard components and a modular concept, each unit is custom-designed for each particular installation.

MEP offers high fresh water capacity with small installation footprint and a low weight, a feature particularly valuable in the off shore industry as well as in other marine and land based installations where weight and space can be limiting factors whereas easy installation is of high importance.

Multi Effect Desalination plants are normally powered by thermal energy, taken as hot water or as low-pressure steam from a boiler or a steam turbine. As the steam has already been used for generating power, the cost of desalination is highly reduced.

The process is based on the evaporation of seawater. This is done by moving the vacuum steam generated by the external energy source over a heating surface to heat the sea water feed on the opposite side of the heat exchanger plates. A part of the seawater flow is evaporated to pure water vapour. The water vapour is then utilized as evaporation energy for the subsequent effect, after which the same process is repeated several times corresponding to the number of effects. 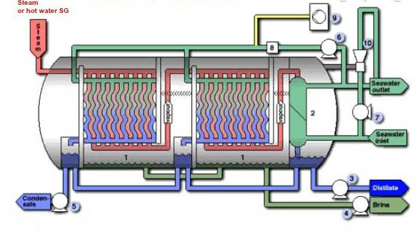 The water vapour generated from the last effect is condensed in the main system condenser cooled by seawater. A dedicated PLC (programmable logic control) system ensures that the desalination unit operates fully automatically with a short start-up period to the required fresh water production.

Today, with more than 50 years experience, over 30,000 sucessful installations and references throughout the world, Alfa laval is one of the technology leaders in the desalination field.

GWS has installed a total fresh water capacity of more than 1,000,000 m3/day for offshore platforms, cruise ships, merchant vessels of all types and more than 200 land-based installations for power, industrial and municipal applications.

The GWS Multi-Effect Plate (MEP) evaporator is used, among other places, on cruise vessels and at diesel power plants to produce the highest quality fresh water at the lowest possible overall production costs. 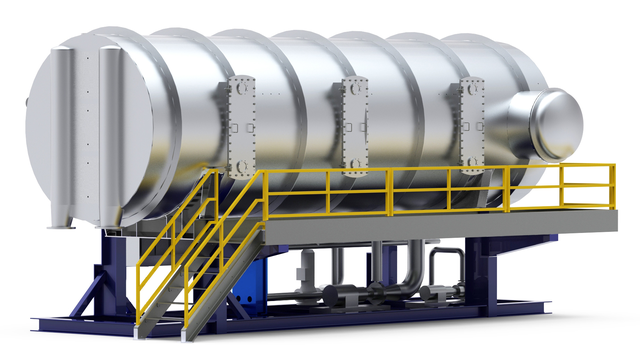 Supplying high quality fresh water to meet the demands on board the fleets of the world and at diesel power plants is a challenge that must be addressed in order to support sustainable development. To meet the growing demand for potable and technical water, it is important to be able to provide economical and efficient desalination technologies.

The GWS MEP system is an easy-to-use fresh water distiller that uses seawater to produce the highest quality distillate with conductivity of less than 20 μS/cm at the lowest possible overall production cost.

Economical and highly efficient, the MEP employs combined plate-type evaporator/condenser effects to produce fresh water using the available waste heat from hot water or low-pressure steam, or a combination of both. The self-contained automated MEP evaporator is designed with very high thermal efficiency for high production rates using very little waste heat. Furthermore, the electric energy consumption is kept to a minimum through the use of an optimized pump configuration and the application of frequency controlled motor on the sea water pump.

With its modular design, this highly reliable MEP evaporator is easy to configure to the requirements of any vessel, diesel power plant. Straightforward operation and automated control provides maximum uptime at less cost compared to technologies such as reverse osmosis (RO) and multi-stage flash (MSF). Its lightweight, space-saving design takes up less floor space while offering much higher thermal efficiency in relation to its volume and weight compared to other evaporators.

This enables the production of much higher volumes of fresh water than other desalination technologies. The MEP system offers the lowest possible consumption of both electric energy and chemicals. The electric energy consumption of the four-effect MEP-4-750 desalination unit, for example, is less than 2.5 kWh/m³. Moreover, the MEP does not require brine circulation or any anti-foam injection, and its total anti-scale chemical consumption is less than traditional multi-stage flash units.

The GWS MEP desalination process consists of a series of evaporation and condensation chambers known as effects (2). Each effect is fitted with heat transfer surfaces based on patented GWS plates. In the plate channels of an effect, seawater on one side is heated up and partially evaporated to distillate vapour, which is used in the next effect; on the other side, the distillate vapour from the previous effect is condensed, giving up its latent heat, into pure distillate.

By maintaining a partial pressure difference across the effects, the process is able to yield maximum efficiency from available low-grade thermal energy sources. The performance and the capitalcost of the system are proportional to the number of effects contained in a unit. 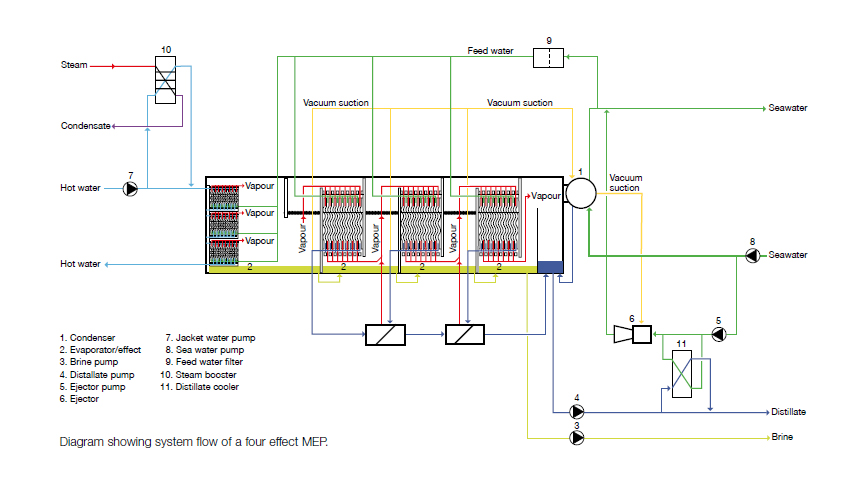 Seawater is pumped into the system via a seawater pump (8) to a condenser (1). Here, the seawater acts as a coolant, removing the heat supplied to the system and thereby maintaining the proper energy balance. In the condenser, the vapour produced in the last effect is condensed into pure distillate.

The process is repeated in all effects. Finally, distillate and brine are extracted from the last effect. The evaporation takes place at sub-atmospheric conditions, and vacuum conditions are created and maintained by a venting system. The venting system is a water-driven ejector (5 and 6), as shown on the flow diagram.

The venting system removes air from the plant at start-up and extracts non condensable gases during operation of the plant. 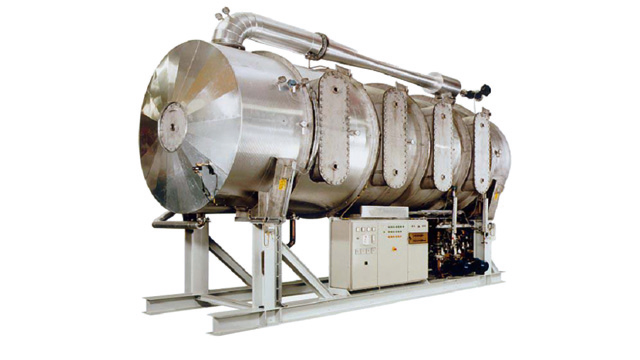 A multi-effect desalination plant is an important component in modern power and process plants with secures a reliable and cost-effective supply of freshwater by using sea water distillation based on waste heat or low pressure steam.

For modern sea water desalination systems the MED is state of the art in thermal desalination. The distillate from MED plants is high purity water with low dissolved solids content. Further water demineralization downstream of the MED plants if required is achieved with significantly reduced chemical consumption and less regeneration of the ion exchange columns. The pressure energy of the steam can be used more efficiently with Thermo Vapour Compression (TVC-MED)

Our product range covers capacities up to 10,000 m3/day per unit. Based on standard components and a modular concept each unit is custom designed for each particular installation.